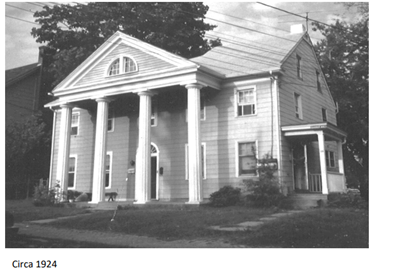 The Woodbury Old City Restoration Committee, http://www.woodburyorc.org/,  in partnership with the St. Joseph’s Carpenters Society, http://www.sjcscamden.org/, are undertaking an ambitious restoration project.  The Pillar-Shute house, located at 46 E. Barber Ave, Woodbury, after having been a triplex for many years, is in a deteriorated state.  Our goal is to restore this multi-family gem back into a single-family home.  After the restoration is complete, it will be sold as an owner-occupied home at market cost.

The history of this property dates back to the 18th century, with documentation of this house having been built during the very first years of the birth of the United States.  The residence was used as a hospital during the revolutionary war in 1777 before becoming a stagecoach stop and tavern.  It was later used as a private family home from the 1800’s until the 1930’s.  In the 1930’s, the home was converted into a duplex and later a triplex for HUD housing.

The costs of the renovations to save this home outstrip the value of the building and land, which is where non-profits such as WORC and the St. Joseph’s Carpenters Society can step in and save a building that may otherwise be lost.  These not-for-profit organizations differ from house flippers, in the sense that they have no profit-based incentive.   With our resources and the generous donations of our supporters we can effect change in this neighborhood, both for the betterment of the community, and to help our neighbors by rehabilitating a blighted property.